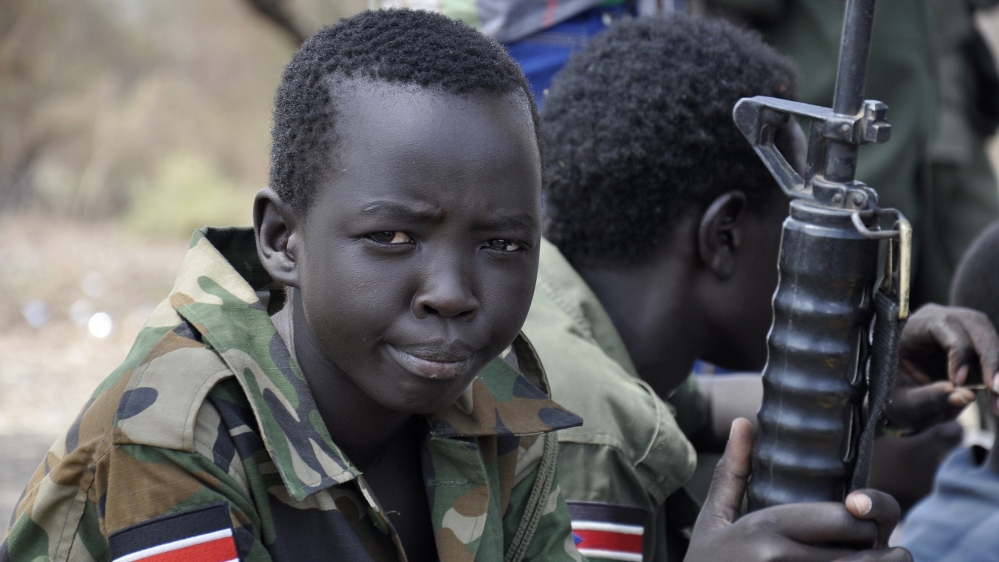 Nimule, September 4,2016; Last Wednesday’s ambush at Kerepi by the unknown gunmen seems to have sent an ominous wave across Magwi, forcing some of Paul Malong’s child soldiers to flee to Uganda. Reports coming from the ghost town of Nimule indicates that dozens of Malong’s malnourished recruits, most of whom are of school age, crossed to Elegu to register as refugees following the deadly clash in Kerepi which caused 19 lives of their fellow kraal mates during cassava stealing mission.

Sources from the refugees processing centre at Elegu, Uganda border town revealed that the fleeing fighters in Elegu had difficulties explaining their stories to the UN staffs due to language barrier since they don’t speak any human language apart from Dinka. It is a big embarrassment that Kiir and his cliques have embezzlements billions of dollars and yet they are unable to educate their people. He uses them to defend his tribal government only.

When some of the fleeing child soldiers were asked why they have deserted the army, they admitted plainly that they fear facing the invisible fighters operating in Ma’diland. They claim those fighters can strike like lightning without warnings and they are not visible.

“How can we fight with invisible things?’’

“We only hear gunshots and see dead bodies but we don’t see the shooters.” Said one of the frustrated underage deserters who spoke to revolutionary columnist through an interpreter.

The child soldier’s account confirms claim made earlier on by traditional landowners of Magwi that their defending forces become invisible to invading forces, and their ancestral spirit can send epidemic diseases such as choleras to clear the invaders till purity of the land is fully restored, meaning; all the Dinkas who are forcefully grabbing Ma’diland will be no more.

Could this perhaps explain why the SPLA-IG forces in Kerepi also didn’t see “who” or “what” attacked them because all Malong’s child soldiers can tell is that they got quashed by some deadly dudes, but other details defy their understandings.

Some asylum seekers at Elegu, knowing that Malongs’ boys without gun can do no harms, took the opportunity to express their frustrations toward them. One young lady asked;

“Will you go and molest women in the refugee camp also?”

Another Old man also told them that his five years old grandson is more educated than all of them (Malong’s fighters), because they only know how to use gun, and that their president is not preparing them to face the real world.

The crimes committed by Kiir’s government are now becoming a global concern. The United Nations International Children’s Emergency Fund (UNICEF), in its recent report implicated his forces in the recruitment of child soldiers since the July 7th return to hostilities, and has asked his government to immediately halt such unlawful acts. But to effect this. Commendably, the child soldier recruiter, Paul Malong and his senior commanders’ activities must be brought to book immediately.

Email: This email address is being protected from spambots. You need JavaScript enabled to view it.